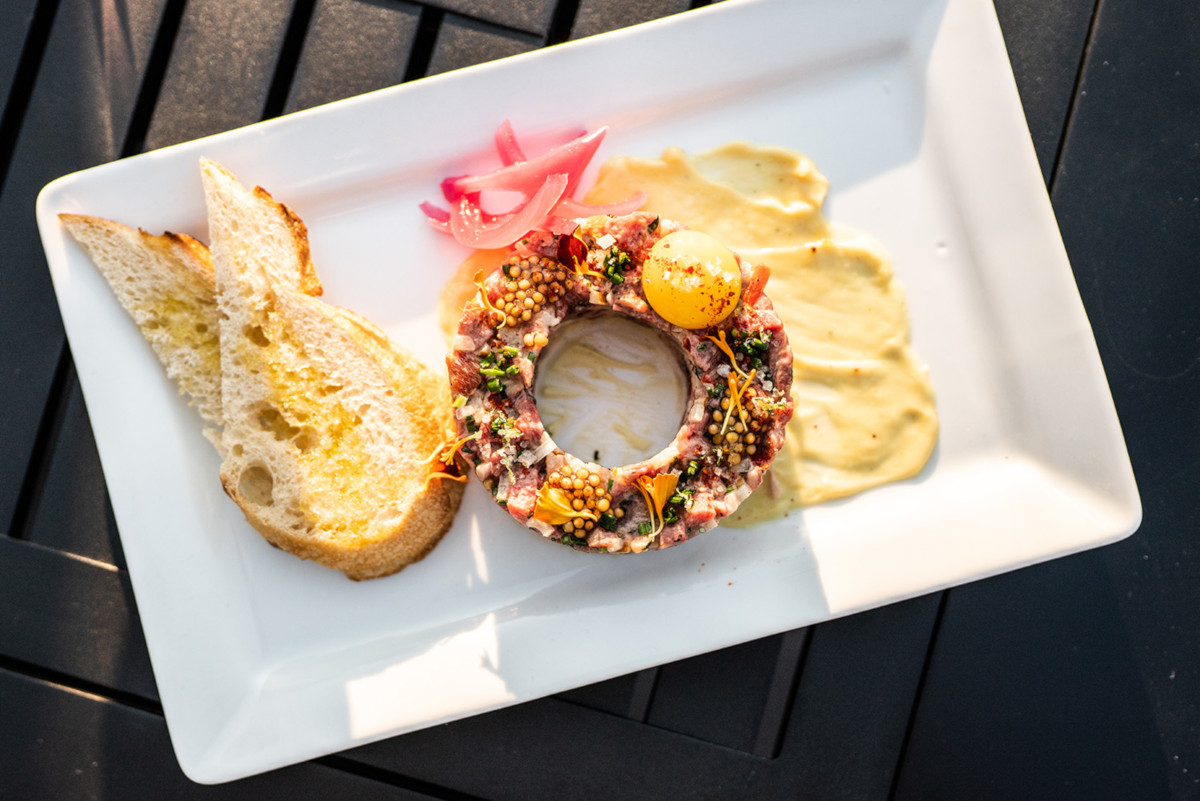 John Wahlke often goes camping and brings forest delicacies back to our kitchen—nettles, spruce tips, fiddleheads, and sometimes huckleberries. There are bursts of oyster, deer, chanterelle, and lobster mushrooms, too. And morels. John knows where to find them all.

Yet foraging is just a tiny part of this inherently joyful chef’s raison d’être. He’s in this work for the sheer pleasure of creation.

In addition to his forest finds, John grows eclectic herbs and edible flowers in our on-site gardens for our cocktails, compound butters, and garnishes. You’ll see spruce tip butter, foraged and pickled cocktail garnishes, and menu items such as a chanterelle and oyster mushroom burrata tartine and a litany of specials throughout the week that feature wild, home-grown, and local foods.

John’s culinary skills are grounded in his 18-year career as a sous chef or lead chef at a wide array of restaurants, including mom-and-pop stops, casinos, country clubs, and high-rise hotels. His menu approach is expressive and intentional.

But before he had a chance to demonstrate his skills in the kitchen, the pandemic hit—just three days after he started at Mischief on Canal. So we had to wait awhile before we got to serve his food. However, that meant we got to see his work ethic up close. And it’s just like ours: tireless and optimistic. Even though he wasn’t able to jump into the kitchen right away, John knew exactly what to do. (Who is a restaurant kitchen veteran, really, but someone who knows how to respond to emergencies?). 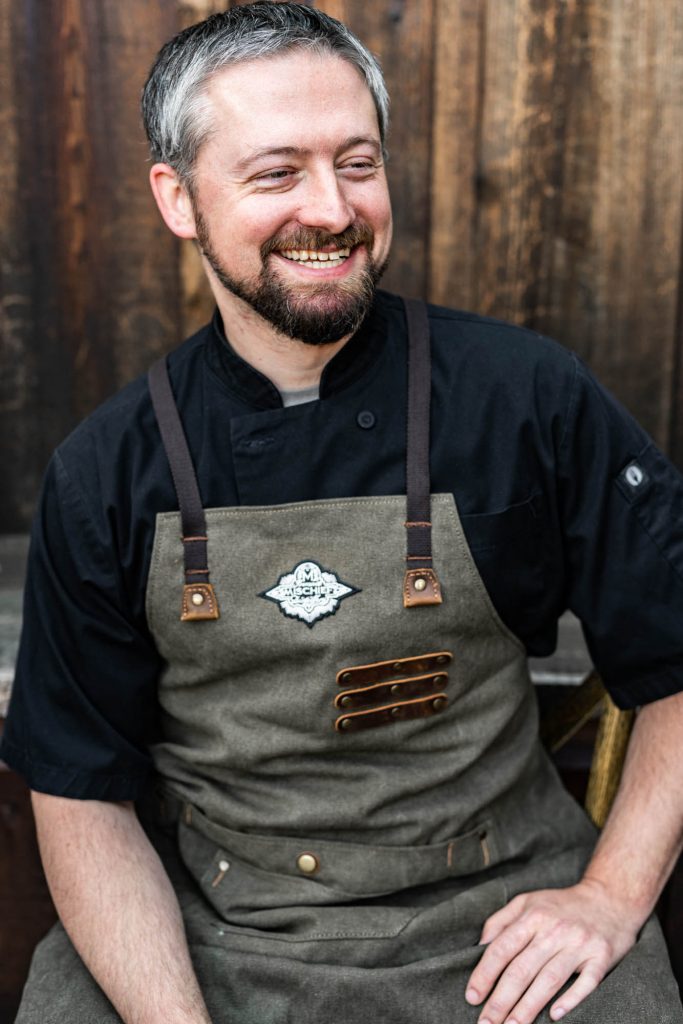 During the shutdown, John spent hours in the back making hand sanitizer with co-owners Mike Sherlock and Patti Bishop. He barreled an experimental house vinegar. He painted bathrooms. He collaborated with Mike to create our on-site gardens (Mike constructed them and John filled them with herbs and vegetables during the lockdown).

In anticipation of our reopening, he designed a menu of small plates that not only complement Fremont Mischief Distillery’s celebrated spirits but stand alone as gustatory works of art. When we reopened it was a double celebration: of the return to service and the launch of Chef John’s extraordinary Mischief menu.

“He always sets the bar so high, but without any of the drama,” Patti says. “Even when it’s stressful in the kitchen, he’s good-natured and humble. The truth is, John is on a different level. The food is phenomenal. He knows how to open you up to new flavors.” 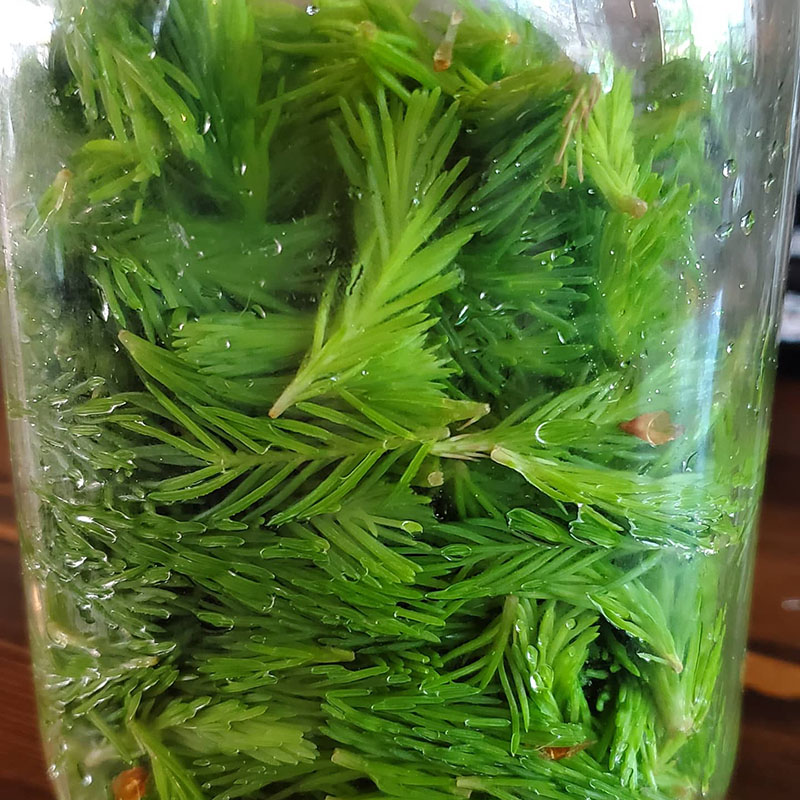 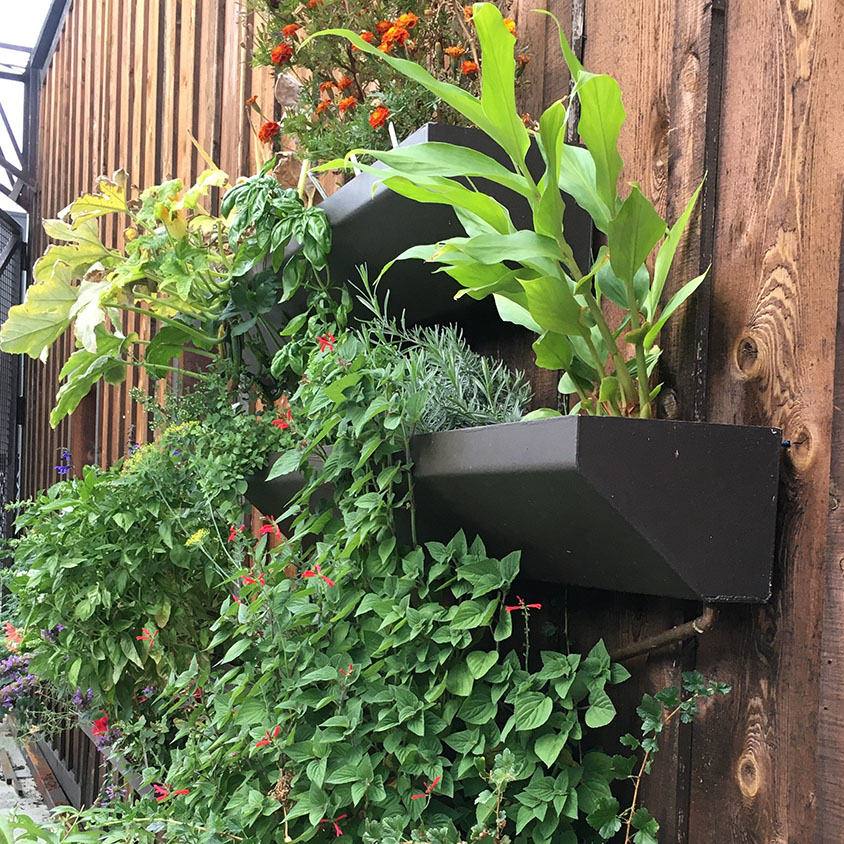 One of the Herb Walls, planted with ginger, mint, sage, marjoram 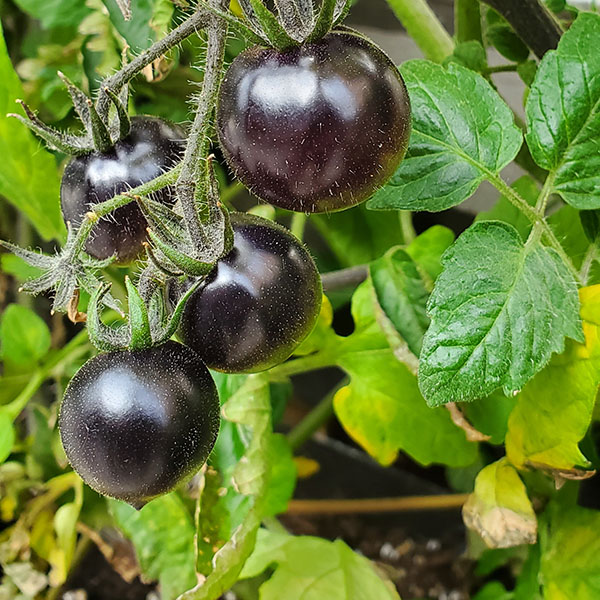 Before planting our garden beds, John designed the dishes in which he would use them. Before designing the menu, he internalized the subtleties of our whiskeys. His entire approach is about pairing Mischief spirits with foods and, sometimes, using them directly as ingredients.

To that last point, John developed a house barbecue sauce that incorporates our smooth, woody Purple Tibetan Ancient Grain Straight Rye. He created a new house olive oil infused with castoff aromatics from our gin. He steeped watermelons in our Skagit Gold Rye Old Fashioned and tossed cubes of it into a salad with ricotta, smoked blueberries, and pickled shrimp.

But most of John’s creations are companionable, created to be eaten along with a glass of straight whiskey or a whiskey-forward cocktail. The backdrop of oak and maple in our classic ryes taste just right alongside the pickled deviled eggs that are already a house standard. They’re a visually arresting combination of pink beet-pickled egg whites, herby yolks, pork butt or Mama Lil’s peppers, and his fermented caviar-like mustard seeds. He recommends the Purple Tibetan with the dark chocolate avocado mousse. The oil-cured Hama Hama smoked oysters were developed to accompany the Skagit Gold Straight Rye Whiskey.

His dishes are distinguished by layered flavors and exquisite presentation. The kitchen is a one-person gig, so every bite is constructed and primped by John. And though he’s careful about recipe development, he’s not wedded to a standing menu. He’s compulsively pro-fisherman and pro-farmer, prioritizing the freshest Pacific catch and market produce. (He tells an enthusiastic tale about finding a vendor selling an uncommon variety of slick mushrooms that can be used as a thickener.) 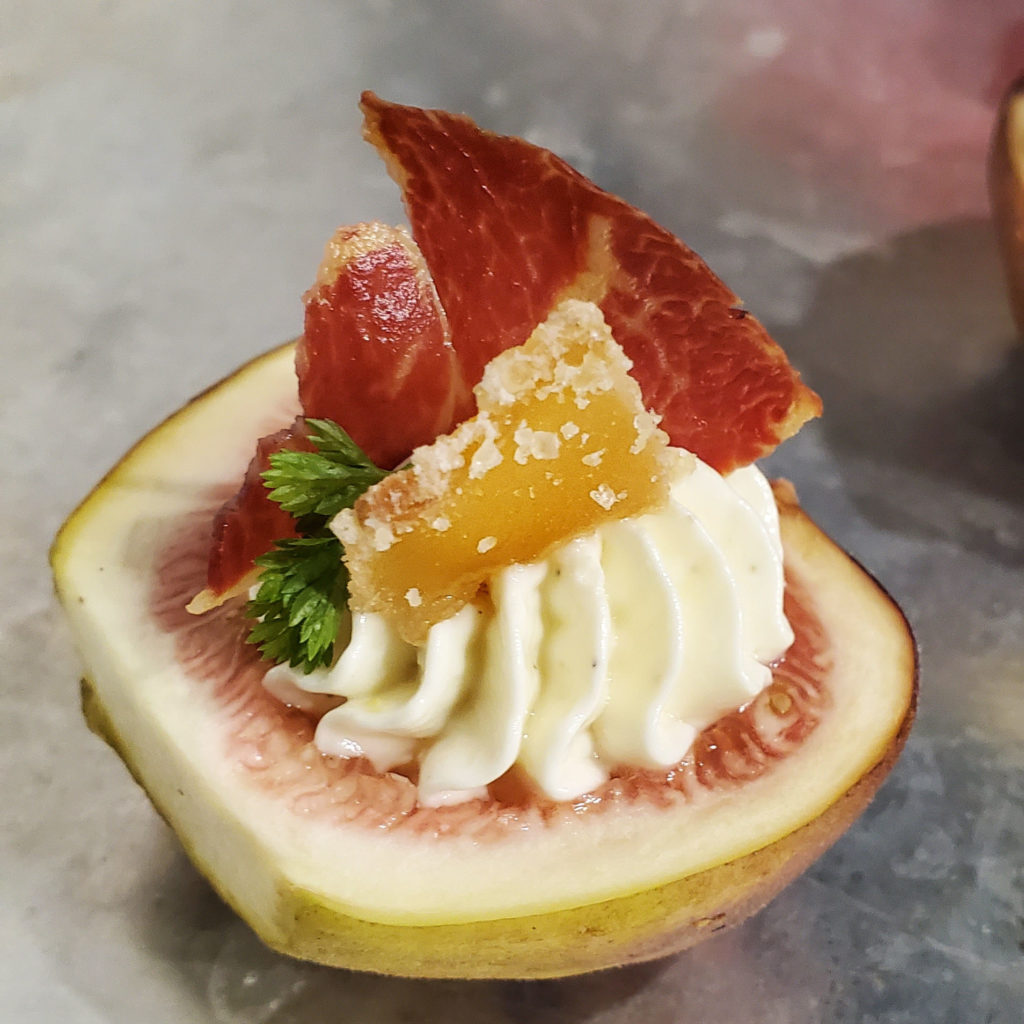 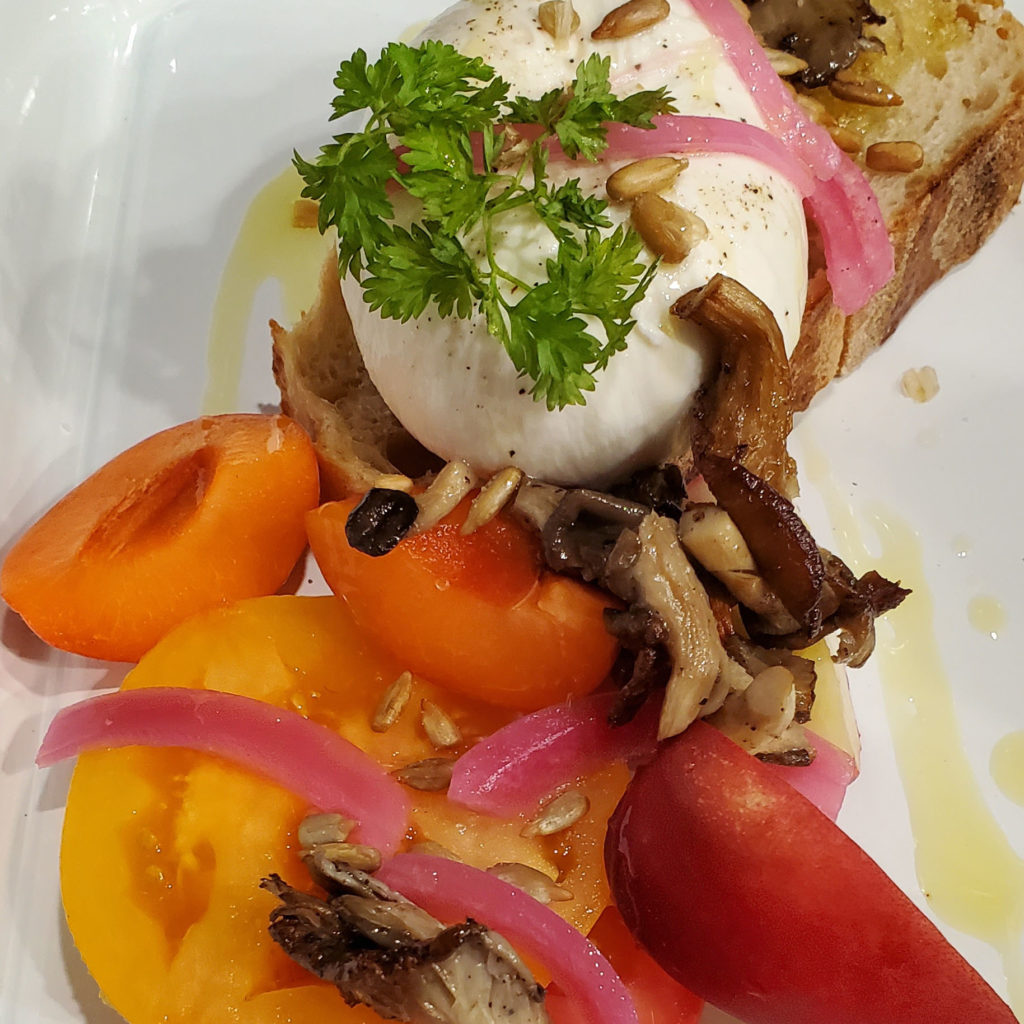 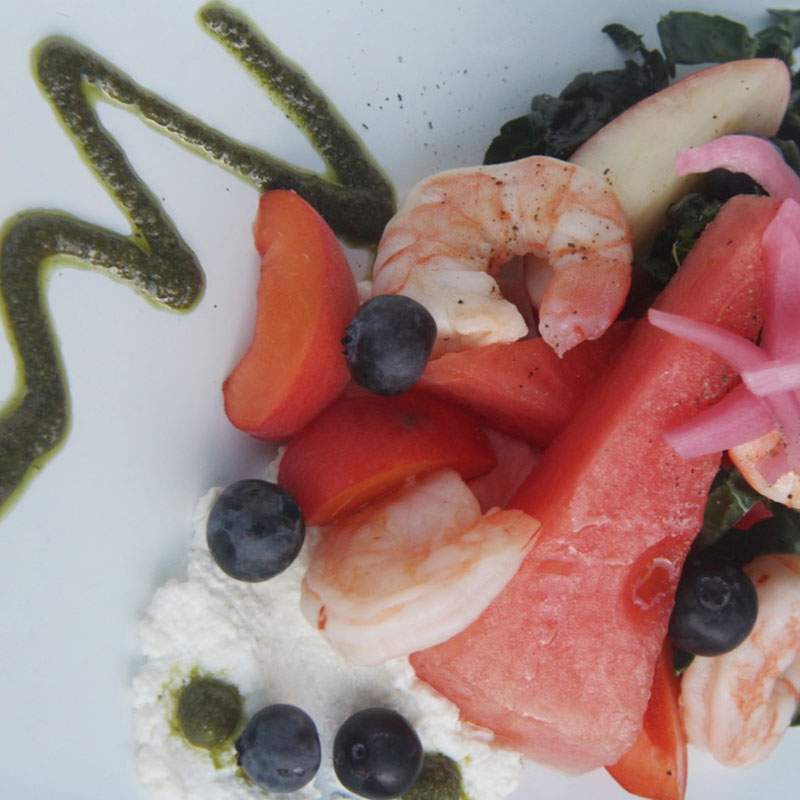 “Everything I do here is going to be done with a lot of purpose,” John says. “I’m kind of particular. I want to create the perfect bite.”

Most of his dishes, of course, center on goods from local producers. John grew up in South Seattle and has been visiting Pike Place market since he was a kid. As a chef he drops in weekly, checking in with Sosio’s Fruit and Produce and other favorite farm stands to see what’s fresh. He also has relationships with Hama Hama Oysters and Tallgrass Bakery. He has his eye on a sea vegetable harvester in Alaska.

And he’s always looking toward another chance to taste something new, another combination of flavors, the next opportunity to share. “Let’s try it,” he often says, “and see what happens.” 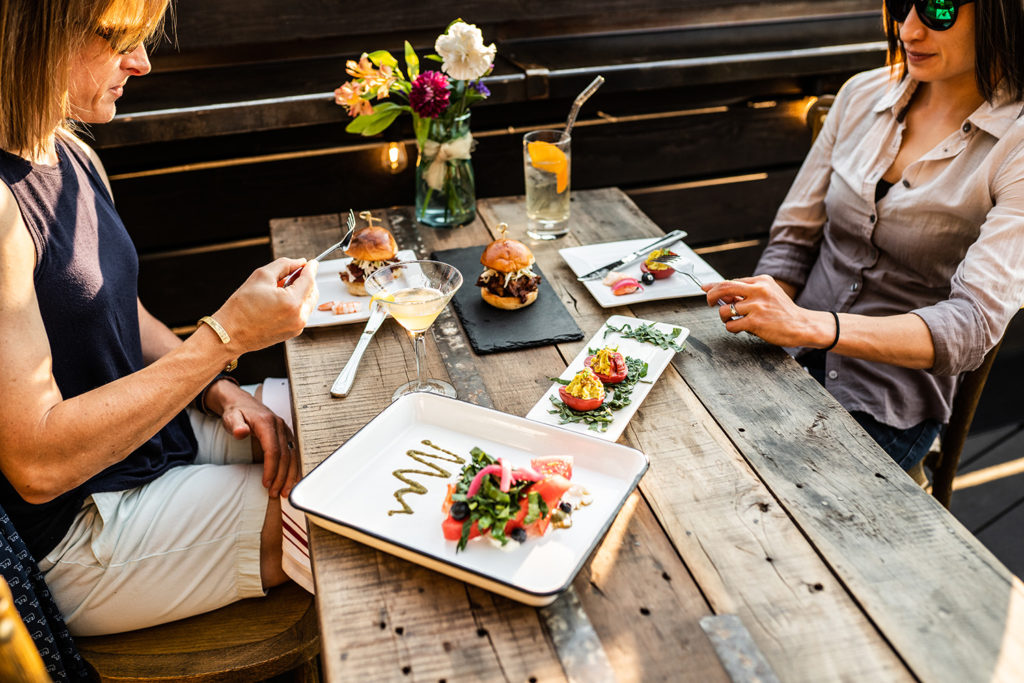 Get into a little Mischief with us!